Eliot and I had the good fortune of watching the “The Shape Of Water” at the Coral Gables Art Cinema Wednesday night. We are members and we love the vibe there. The founder and the artistic director of the theater usually introduce the movies with creative background stories.

We had a special bonus Wednesday night. The theater arranged for an after-movie interview with the screenwriter Vanessa Taylor via Skype. Taylor wrote the movie with director/producer Guillermo del Toro.

The interview turned out to be very interesting for anyone who loves movies, is interested in the making of, or wants to get into the business. Taylor’s candor spoke volumes about how movies are made and how much of the work is as routine as most of our jobs.

I taped the interview but not very well. I was sitting in the back of the theater and was blocked by rows of people in front of me. Then the Skype froze and we only had audio. I did the best I could. It’s the content that counts. I had a half hour’s worth but YouTube would only record 15 minutes worth.

The video should be seen by everyone who wants to get into the business. There are lessons to be learned.

The Shape of Water is a 2017 American fantasy drama film[4][3] directed by Guillermo del Toro and written by del Toro and Vanessa Taylor. The film stars Sally Hawkins, Michael Shannon, Richard Jenkins, Doug Jones, Michael Stuhlbarg, and Octavia Spencer. Set in Baltimore in 1962, the plot follows a mute custodian at a high-security government laboratory who befriends a captured amphibian creature. 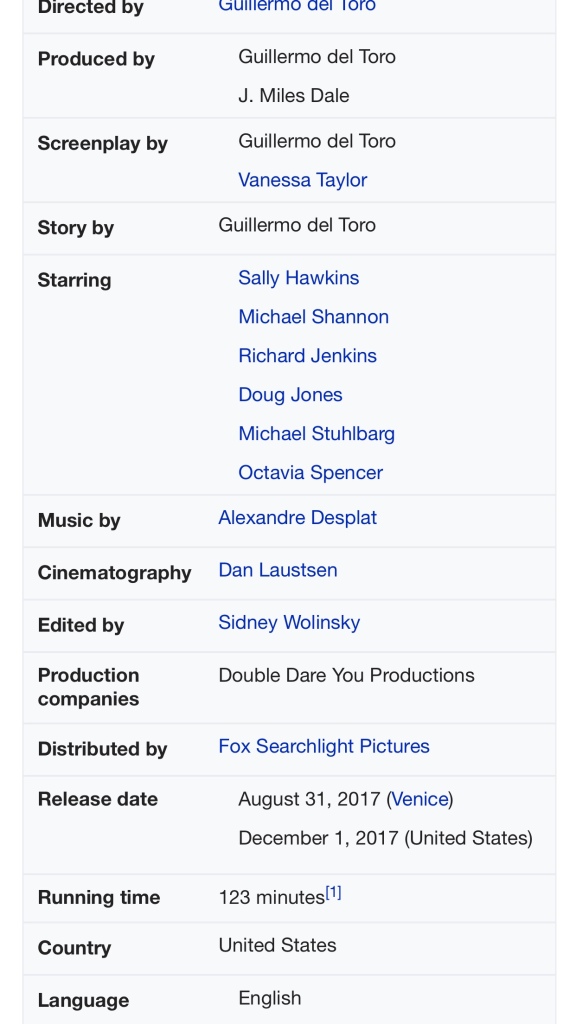 1 thought on “The Making Of “The Shape Of Water””