Walt Mossberg, the most iconic writer/reviewer in the tech industry.

Steve Jobs relied on Walt for his opinions and views.

The tech industry is about to change forever. Walt Mossberg, one of the most prominent and respected journalists in the tech world, is retiring this month. He is exactly my age. I don’t know why he is retiring, other than he wants to do other things with the rest of his life.

His last tech column is not to be missed. I’ve included it here because it will give you a great sense of where the industry is going. It’s called “The Disappearing Computer.” You can access it here. Walt claims that tech “was once always in your way. Soon, it will be almost invisible.”

I was going to cut and paste some of his copy here because I wanted to make sure you read it. Then I realized, I’m just going to have to trust you.

Click here to hear, Ctrl-Walt-Delete, the podcast I am talking about below.

I just finished listening to a podcast about Steve Jobs that perhaps was more personal and more interesting than anything I ever read about him in a book or saw on a screen. I stumbled upon “Ctrl-Walt -Delete” on Twitter and just spent the most enjoyable 49-minutes hearing Walt Mossberg, Founder of Re/code (recently acquired by VOX Media) and Nilay Patel, editor-in-chief of The Verge, (also owned by Vox Media) detail why Jobs really changed culture, technology, retail, and entertainment, in ways few of us truly realize.

The focus of the podcast was their reaction to the movie, “Steve Jobs,” by Aaron Sorkin. Both journalists have great respect for Sorkin but say the movie did not represent the Jobs they knew. Jobs was close to Mossberg for years, and often called upon him for his opinion about new product introductions. That relationship morphed into a personal one, even though Mossberg knew and understood why Jobs befriended him in the first place. “I’m not a dope,” Mossberg stated during the podcast.

Mossberg believes if Sorkin wanted to write a fictionalize version of Walter Isaacson’s book, Steve Jobs, he should have given the movie a different title. He refers to what Orson Wells did with Citizen Kane (1941) which took artistic liberties with the life of William Randolph Hearst.

For Mossberg and Patel, the real injustice of the movie was that it didn’t really focus on the 14 years when Jobs came back to Apple. These are the years they refer to as “The maturing of Steve Jobs.” These are the most important years where he redefined the cell phone, the music player, the tablet, and the Mac computer. He did all this while he ran one of the most successful movie studios, Pixar, and created The Apple stores.

I could go on forever about this podcast but the best read blogs are the short ones. I really encourage you to listen to it because what they have to say about John Sculley, Bill Gates, Steven Balmer, Sorkin’s career, Jobs’ wife and children. They also describe the personal side of Jobs who they claim had the most magnetic personality on stage. It is truly a life lesson for all people starting their careers and for those who want to stay in the game.

At a certain age, I had to put up with finding out there was no tooth fairy, no Santa Claus, and no Easter Bunny.

I obviously survived all those disappointments, but I don’t know if I can survive this one: as of the first of the year, Kara Swisher and Walt Mossberg will no longer be producing AllThingsD for the Wall Street Journal. My equilibrium is now all messed up.

Kara and Walt represent the epicenter of the digital universe as far as I am concerned. Their consistent ace reporting and leading industry guidance, has helped give birth to some of the greatest innovations of our lifetime. Rumor has it, that Steve Jobs would call Walt in the middle of the night to get his opinion about moves he was planning to make. Today the founders or leaders of Google, Twitter, Facebook, Tesla, Amazon, eBay, and Microsoft regularly contact the dynamic duo for their all-important reality checks.

AllThingsD was launched by Walt and Kara, both former WSJ tech reporters/columnists, seven years ago as an extension of The Wall Street Journal’s D: All Things Digital conference.

I don’t think I missed a morning since they started that gig that I didn’t read them and then check back several times during the day to see what else was going on. No matter what other tech site I read, AllThingsD represented the ultimate truth in the ever developing story of Silicon Valley. I’m not the only one who feels that Kara and Walt just have the finest reputations.

I can’t Imagine what the WSJ was thinking when they didn’t renew with Kara and Walt. AllThingsD was the must respectable part of the WSJ organization. While reports claim that the WSJ will try to replace them with new tech hires, I think it is safe to say that it will take years for the publication to capture the caché they once had.

It just proves there is nothing sacred in publishing. It a dollars game, nothing more, nothing less. If the legendary folks cost too much, bring in the youngsters. Editorial is nothing more than some gobbledygook crammed between the almighty ads.

When I look at the larger picture, I realize that Kara and Walt have a better future ahead of them. Either they will sign on with another media service or start their own. In either case, the millions of readers who believe in Walt and Kara will follow them anywhere. They are a part of our digital DNA. We can’t live without them. 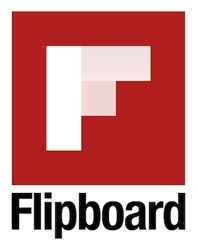 I always feel left out when something new in tech is introduced and I don’t know anything about it. Then I feel worse when I open the various tech periodicals, sites, and blogs to see everyone writing about the new, exciting introduction. I feel like a secret society got together to get clued in and then did the pinky swear thing. No one talks about the new product in the press until the agreed upon date.

END_OF_DOCUMENT_TOKEN_TO_BE_REPLACED

I am finally soaking in Twitter for all its worth. I talked about this a few weeks ago but I am really seeing the benefits now. All I have to do is open my Twitter account and start reading.

I follow about 380 people who tell me all that I need to know on a second-by-second basis about politics, current events, business, technology, health, food, theater, fashion, economics, music, pop culture, the arts, city news, publishing, and entertainment. END_OF_DOCUMENT_TOKEN_TO_BE_REPLACED

The other night when he appeared on stage at the 92nd St.Y, along with Walt Mossberg and Kara Swisher of the Wall Street Journal’s AllThingsDigital, Eric Schmidt, Executive Chairman of Google, hinted that his company’s self-driving cars will be on the road earlier than originally thought. It appears that a number of government officials in California, Nevada, Florida, Hawaii, New Jersey, Oklahoma, and the District of Columbia, all want to lead the way to make these cars legal. Some states already have legal rights to test them. Schmidt said Google “is very interested in leading the way most people will get around.”

This is a real mindblower.

Google began testing the self-driving cars in 2009 along side engineer Sebastian Thrun, who had previously worked on the technology with the Stanford University faculty. Google co-founders Larry Page and Sergey Brin are cheerleading Thrun to perfect the technology. Yes, the cars drive themselves with the aid of lasers, cameras, and other gear. Schmidt revealed that Google’s autonomous cars have already racked up more than 100,000 miles on the road.

It is very possible that five years from now, when many of us will need them most, we will be able to take advantage of this wondrous invention. Just imagine the implications. We will be more independent than ever before, going where we want to go, when we want to go there. Schmidt said that autonomous vehicles are safer than human drivers. “This technology could prevent accidents, help disabled people get around, and reduce traffic congestion and gas consumption.”

General Motors and Toyota are working closely with Google to hasten the development of the technology.

Swisher added that she took a test run and it was a totally weird sensation. “I found myself breaking to stop and wanting to put my hands on the steering wheel. It is going to take some to get used to this.” Schmidt summed up this advancement in technology saying that “humans driving cars was a big mistake. This is the way it was meant to be.”

Swisher must feel Google is getting closer to introducing the self-driving cars to the marketplace because soon after the 92nd St.Y discussion, the Wall Street Journal released an update on it. My comment is, “This may be a good time to get older.” 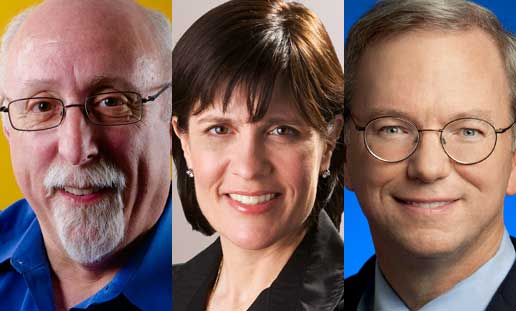 I was waiting for this night for a long time. Three of the most famous names in the digital world were on stage at the 92nd St Y in NYC, one of the most respected institutions for lectures, talks, and entertainment in the United States.

Most of the presentation focused on what Schmidt calls “The Gang Of Four,” Google, Amazon, Apple and Facebook. He said the future really will be about what Facebook does the best, gather personal information from users and their contacts. This will be a valuable growth area and each company will integrate this into their own formats.

Schmidt also pointed out that big name, national newspapers will survive but local ones will not. As strange as this sounds he predicts that celebrities Iike Jay-Z will be the big brands in publishing. “It is very obvious that Americans are celebrity crazed and follow their every word. A newspaper named after a major star will draw more attention than what local newspapers call themselves today.”

Another Schmidt prediction is that mobility will be the most important factor in technology growth. “Software will be designed for mobile devices and then for the web. Today it is the other way around. We have discovered that most users can get along with just using their smartphones. They don’t need anything else.”

Schmidt said six billion people use a phone. One billion use a smartphone. He wants Google to always be the “Center Of Information.”