I just did a quick survey. 10 out of 10 seniors have no idea who Generation Z is. If you do know, consider yourself well-read/well informed.

Because I read so many digital-oriented sites, I knew about the new Generation Z, (also known as iGeneration, Centennials, Post-Millennials, Homeland Generation) the demographic group coming up after Millennials.

So far, no one has designated the exact dates of  Generation Z, but Internet influencers are guessing it starts in the mid-1990s to mid-2000s.

Forbes magazine has disclosed some information about Generation Z:
1-This group is larger than the number of baby boomers.

2-Their parents are Generation X.

4-Most were not born when the 9/11 attacks took place.

5-They are loyal, compassionate, thoughtful, open-minded, responsible, and determined.

6-Many students use mobile technology more than anything else.

This is what I call a natural.

WeWork, the real estate company which offers shared co-working offices in 17 countries, with 170 locations, across 58 cities, has purchased Meetup.com, a online social platform that brings people together for common interests like book clubs, tech seminars, and hobby groups.

WeWork told the press “that 100,000 people have attended Meetups in WeWork locations this year. With the deal, WeWork will get access to Meetup’s 35 million members.”

WeWork, which launched in 2010, is worth an estimated $20 billion according to a Google search. Terms of the deal were not disclosed.

The reason why I am writing this blog post is because not many people our DigiDame age have engaged with both companies. I have. While I was mostly surrounded by much younger folks, I always took advantage of what they had to offer.

Our lives would have been much different if we could have easily accessed like-minded people when we were just starting out. The networking facilities and programs provided by WeWork and Meetup nurture careers that lead to important contacts and brand new ideas that you  just can’t get anywhere else.

I urge you to partake in a WeWork facility or Meetup gathering if you have a new idea for a business, or if you want to help a younger person in your family. It’s like entering a new  world.

Don’t miss it. You will be amazed and slightly envious of what we missed.
.

The minute Eliot and I got a notice from the Perez Art Museum Miami, better known as PAMM, that artist and author Michele Oka Doner, was going to be interviewed by curator René Morales, we knew we had to attend.

We did, and we just got home.

We wanted to meet her. Oka Doner was commissioned by our condo board, in South Beach, to redesign the massive floor in our lobby. She is internationally known for her numerous public art commissions, including the “Radiant Site”, at New York’s Herald Square Subway and “A Walk on the Beach” at the Miami International Airport.

Oka Doner’s work is inspired by her passion and appreciation of the natural world. Her new book, “Intuitive Alphabet,” is all about the insights into the way language has evolved over the years.. It’s really fascinating. The books are for adults, and for adults to share with children.

How beautiful is that? 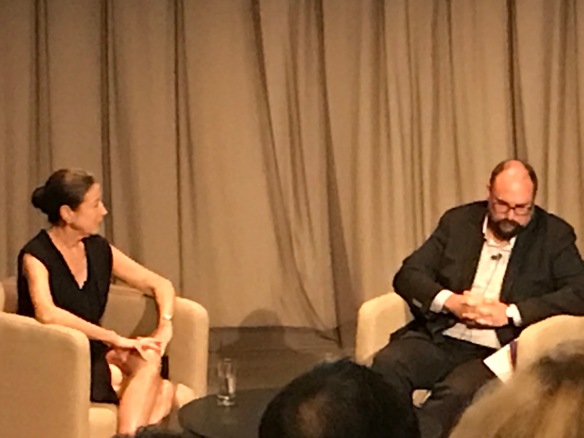 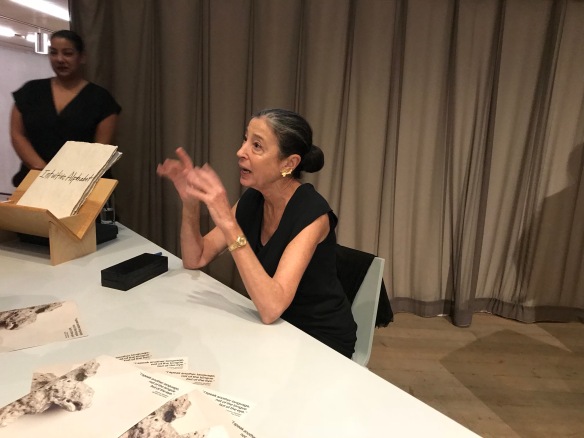 Some folks bought six copies each for holiday gifts.

Oka Donor was happy to see so many people loving art.

At 73, there are no signs of her stopping. 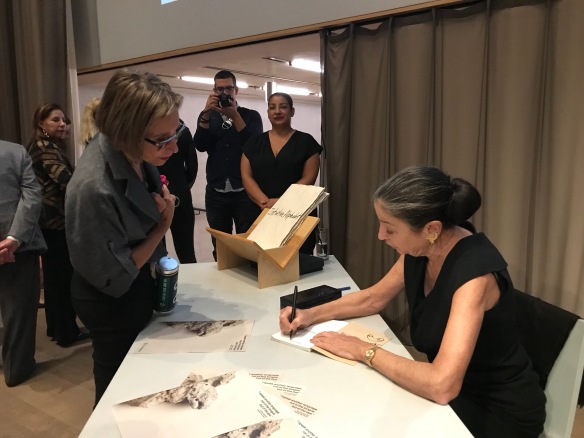 She has a formula that works.

Did you hear the news? Dictionary.com chose “complicit” as the Word of the Year.

Scarlett Johansson helped to make the word  very popular this year. Her performance in a satirical perfume ad on “Saturday Night Live” generated a huge increase in the search for the meaning of the word.

Com·plic·it is an adjective. It means that someone is involved with others in an illegal activity or wrongdoing.

In a press release, Dictionary.com said online searches of this word increased by 300 percent over 2016. The word received  the support of the staff of Dictionary,com which included lexicographers, marketing folks, product teams, and the CEO, Liz McMillan.

Just when I thought that the Internet was wiping out everything that was in print, I find out that hard copy catalogs are in vogue again. I truly never thought we would see those thick picture books again in our mailboxes.  I was wrong.

I just read in the Los Angeles Times that printed catalogs are re-surfacing again in an effort to combat email fatigue. Many retailers around the country feel there is so much shopping noise online, that they feel they can standout from the crowd if they “choose paper over pixels.”

I find that totally ironic.  I was so happy for retailers that they didn’t have to spend huge sums of money creating and mailing those heavy brochures anymore. Now an increasing number of retailers want to go through the expense once again because they believe it will generate more business.

Research conducted by the Data & Marketing Assn. and the U.S. Postal Service, revealed that consumers are getting fewer catalogs in the mail, but they are paying more attention to them.

Find out which retailers are resurrecting catalogs by reading the Los Angeles Times story. Click here.

I never heard of the band “OK Go,” but I learned something very high tech about them today. They are known for their very creative music videos. They use scooters, cars, planes, treadmills to underscore their  unique choreography.
The new video, called “Obsession, “ has a wall of 557 printers that are used as a backdrop. See the above video.

“This video has a lot of flashing colors. If you’re susceptible to seizures, be careful, 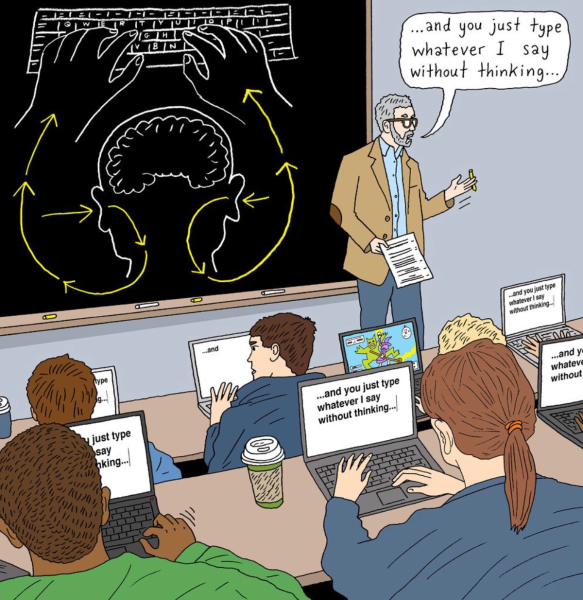 This is one for the books. College educators are now saying that there is increasing evidence that  students learn less when they are using a laptop or tablet during lectures.

I was stunned to read this in the New York Times because I have been pretty envious of folks who can take notes on their computers while listening to a discussion, file them in a designated electronics folder, and/or distribute the information to targeted audiences.

I have always had to do this in several steps, over several hours. Yet, young folks can do all this while the meeting they are listening to is still in progress. Now, educators are claiming that students are not really absorbing the information. I find this very strange considering how many years laptops have been in the classroom environment.

The reasons why are so ridiculous that I urge you to read the New York Times story.

All I know is that I watched a young neighbor takes notes on his iPad during a coop board meeting and before the discussion was over, he accomplished all of the follow-up work. Everything was done on-the-spot. I wish I could do that.

I would have to go home. look at my notes, and then start attacking the “To Do” list. My young friend was trained very differently. He is far more efficient. It’s difficult to believe that he didn’t hear, absorb, and completely understand all of the facts being discussed.

You decide after reading the story.

Lois Whitman-Hess was featured on LA40, an internet video show hosted by Katerina Cozias. Lois along with her husband Eliot Hess, own HWH PR, a leading public relations agency in the U.S., for over 40 years. Their company has represented more emerging technologies than most other agencies in the world. It’s been an exciting life for them.

1-What is the PR business like these days?
2-What are the new emerging technologies that everyone should know about?
3-How important is social media?
4-Do you like to represent start ups?
5-Is it true that you have authored a daily personal blog called DigiDame for over 5 years and why ?
6-I understand that you have attended every CES show in Las Vegas and how has that impacted your life?
7-How long do you think you will continue working?
8-What exciting things are you working on and what can you share with us?

Philosophy……………There is MUCH to learn here!

♦ I read that 4,153,237 people got married last year. Not to cause any trouble, but shouldn’t that be an even number?

This is where we got married 38 years ago, Palm Springs, CA.

* I find it ironic that the colors red, white, and blue stand for freedom until they are flashing behind you.

♦ When wearing a bikini, women reveal 90% of their body. Men are so polite they only look at the covered parts.

♦ Relationships are a lot like algebra. Have you ever looked at your X and wondered Y?

Whitney joining in on the celebration.

♦ America is a country which produces citizens who will cross the ocean to fight for democracy but won’t cross the street to vote.

♦ You know that tingly little feeling you get when you love someone? That’s your common sense leaving your body.

♦ Did you know that dolphins are so smart that within a few weeks of captivity, they can train people to stand on the very edge of the pool and throw them fish?

♦ My therapist says I have a preoccupation with vengeance. We’ll see about that. 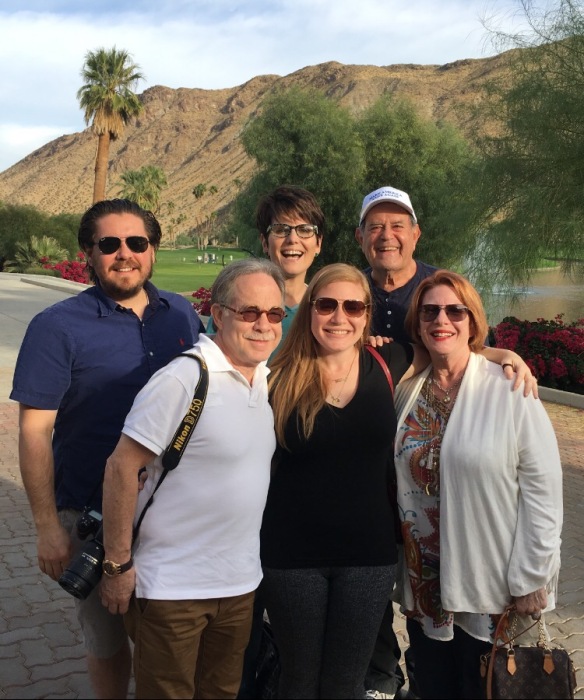 Celebrating my birthday with Lucie Arnaz and Larry Luckinbill.

♦ I think my neighbor is stalking me as she’s been Googling my name on her computer. I saw it through my telescope last night.
♦ Money talks …. but all mine ever says is good-bye.
♦ You’re not fat, you’re just easier to see. 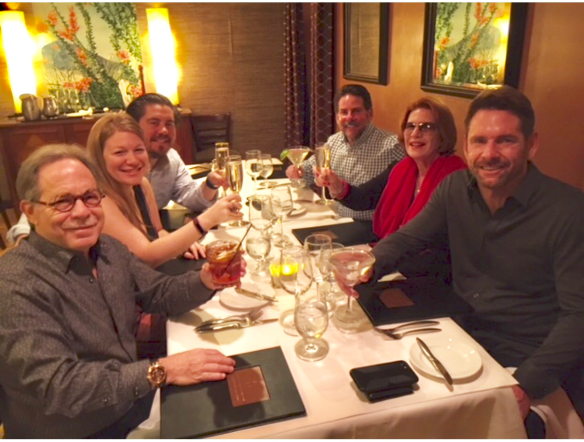 Birthday dinner with Larry and Darren

♦ If you think nobody cares whether you’re alive, try missing a couple of payments.
♦ I can’t understand why women are OK that JC Penny has an older women’s clothing line named, “Sag Harbor.”
♦ My therapist said that my narcissism causes me to misread social situations. I’m pretty sure she was hitting on me.
♦ My 60 year kindergarten reunion is coming up soon and I’m worried about the 175 pounds I’ve gained since then.
!
♦ The pharmacist asked me my birth date again today. I’m pretty sure she’s going to get me something.
♦ The location of your mailbox shows you how far away from your house you can go in a robe before you start looking like a mental patient.

♦ Money can’t buy happiness, but it keeps the kids in touch!
♦ The reason Mayberry was so peaceful and quiet was because nobody was married. Andy, Aunt Bea, Barney, Floyd, Howard, Goober, Gomer, Sam, Earnest T Bass, Helen, Thelma Lou, Clara and, of course, Opie were all single. The only married person was Otis, and he stayed drunk.
Have a Happy Thanksgiving ! 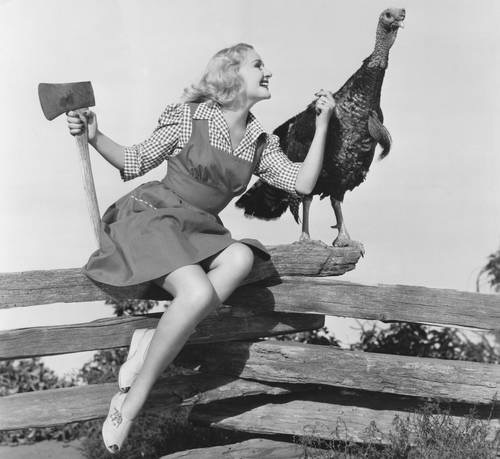 My friend Steve Greenberg sent me this article in Popular Science the other day. He said he thought DigiDame readers would like the scientific turkey information right before Thanksgiving. It will save you time, keep you safe, and make you happy.

I outlined the topics below. All you have to do is click here for the entire story.

Bake stuffing without overcooking the meat

Eat as much as humanly possible

Distract your guests with tech

Or with science topics

Play with the frozen turkey