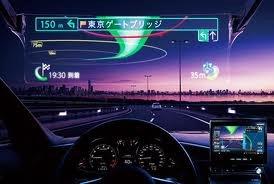 It is very apparent that the automobile is not taking a “back seat” to the home when it comes to innovation. Every year, more and more automobile manufacturers are showing up at International CES because they want to be known as advanced technology companies. The editorial coverage they get at CES is good enough to warrant the expense. This year we witnessed automobiles that can drive, fix, and talk to themselves.

Now comes a new technology that even the best science fiction writers will be shocked to see. It is called “Head-Up Display,” also known at HUD. It’s a transparent display (like a ghost) that is projected on the windshield so drivers like you stay focused on-the-road ahead. Now you will be able to read all kinds of safety and traffic information like weather warnings, clearances for lane changes, incoming phone call identifications, driving directions, traffic jams and general news. There is even talk about gesture controls in the future. At some point we will be able to swipe the windshield to find out how fast the car next to us is going. Wild isn’t it?

The technology was originally developed for military aviation but automobiles are quickly adopting it. HUD has three primary components: a projector, a combiner, and a video generator. Together, the elements generate the imagery on a windshield.
Texas Instruments showed a full color prototype display at CES that could work with a backup camera. That means that for the first time ever, your windshield will project everything that is going on behind you. Harman showed a HUD prototype at CES which claims to be brighter than anything else available today.

Both companies believe that HUD will start appearing in automobiles by 2015. 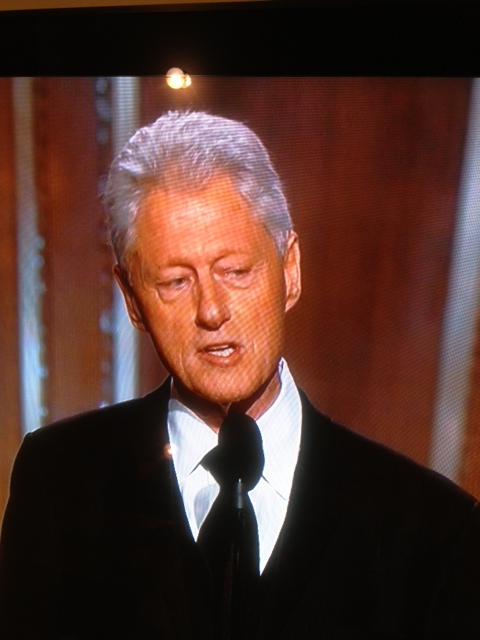 Every time I see Bill Clinton associated with Samsung (personal appearances, speeches, golf outings)I remind myself that I was the one who started it all. He recently was the keynoter for Samsung at International CES in Las Vegas. I am writing this post not to pat myself on the back (that’s a lie) but to share a work experience that underscores that if you want to get something done,”just make it happen.”

With no special talents, I have made impossible dreams come true time after time just by sheer perseverance. In life, people tell us “It’s who we know,” that makes a difference. I am here to tell you that is not entirely true. I hope you share my Clinton experience with every young person you know, so they too can be empowered with the force of “tenacity and determination.”

It was over 10 years ago that I was in charge of getting publicity for Samsung’s then charity,”Four Seasons of Hope.”The event was a month away and I couldn’t get a word written about it. I took a long hot shower (my best think tank) to come up with an idea that would cause media mayhem.

I knew only one guy could do that for me, so the next morning I called the office of President Bill Clinton. An intern picked up the phone and I explained my dilemma to him. I asked the most important question, “How do I get Clinton to Samsung’s charity event?” Only six months on the job, he whispered, “Donate Samsung TV displays to his Foundation and charities.”

I immediately called the marketing executive who I reported to at Samsung, Peter Weedfald, and his co-creator of the event, Susan Grant.They both gave me their support but warned me that the PR better match the donation.

Just telling the press that Clinton was going to show got a lot of interest, but was not getting me the camera crews and gossip press. I took my plight to columnist Andrea Peyser of the New York Post who put her own spin on the story that turned out to be one of the most sensational PR campaigns that I was ever involved with.

When Andrea learned that Clinton was going to be in the same room with Rudy Giuliani (she claimed that at the time they were at war with each other) she ran a picture of them nose to nose on the front page of the Post with the headline, “Faceoff!” The story was all about how Giuliani had been at the event for a few years and now Clinton was attending to possibly steal his thunder.

Every TV station, newspaper, magazine, wire service, radio and freelancer showed up to witness the encounter. The event turned out to be SRO, standing room only. The press was hanging off the scaffolds that were built for them.

Clinton and Giuliani did not disappoint. Being the politicians they are, the stars both walked on stage from opposite sides and embraced in the middle. The crowd went wild. We once again made headlines everywhere.

Ever since then, I have had a special relationship with Clinton that he too admits was built on sweat, passion, and trust. The Samsung people now have a solid relationship with Clinton and I believe I was responsible for it all. I never hear from Weedfald even though we shared career thrilling milestones together. Susan Grant continues to be one of the greatest event producers ever to grace this earth and stays well connected to me.

And then there is Bill Clinton. I am probably one of the few he never propositioned. I never would have taken him seriously anyway. You don’t need to sleep with the man to fall in love. To quote Hillary when she was in the depths of despair over Bill’s worst antics during his Presidency, “He still remains to be the most intelligent, articulate, knowledgable, and seductive man I have ever met.”

President Bill Clinton gave one of the keynote speeches. He poses here with CES top executive Gary Shapiro and his wife.

Jazzed up automobiles were all over CES showing off the newest electronic gear. 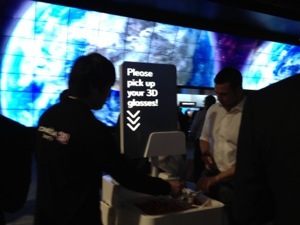 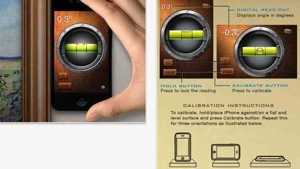 If you watched the video I posted yesterday from Mashable, the tech blog, about International CES, you would know that smartphone apps are going to have a much stronger presence at the show. I am thrilled because apps make our lives so much easier.

There is even going to be a “appy hour” for everyone to meet each other. How cute is that?

The world of apps is amazing. What did we do before them? Some of them were available in hand-held devices. Now we carry one small unit that does it all.

A few days ago I saw a former client at the Miami International Airport when I was about to board my flight back to New York. Shane Samole, CEO of Excalibur Electronics, used to produce hand-held gadgets that did a lot of what we get now right on our smartphones apps, like word and sports games, dictionaries, mind teasers, and children’s activities. We never thought back then that all these little devices would be replaced by software on our cells.

Meanwhile, thanks to Mashable, here is a preview of some of the apps we are going to see at International CES. Read the list and then click here to find out more about each app. Some of these are mindblowers. Most of them are available on all mobile phone formats.

2. Use Your Phone as a Level

8. Use Your Phone as a Remote Control

9. Change the Color of Your Lightbulbs

Every year when I attend International CES, family and friends ask me what I think will be the hottest trends at the show. There is no easy answer to that because the show is no longer just about consumer electronics. It’s about innovation. The show is attracting automobile manufacturers, health companies, smartphone apps, home automation and accessories that hit every category imaginable.

The video below is a real treat for anyone who is not attending the International CES this year because Shapiro outlines what the show is all about. Produced by Mashable, a tech blog, the video is a great look at behind the scenes.