Press on any link to watch a video presentation.

When I first learned that Sony was crowdfunding a new product, I thought I heard wrong. How could a major company be asking the public for money to market a new product? It just doesn’t make sense.

It now makes a whole lot of sense since I understand the concept. If the company is not sure that a new type of product has mass appeal, it let the public decide.

Showcase the product on a Kickstarter or Indigogo type of platform to see if people are interested in buying it. In this case, Sony crowdfunded in Japan, the country where they are headquartered.

The product is a wearable “air conditioner.“ Called the Reon Pocket, the unit slips into a pouch of a special t-shirt. The product sits at the base of your neck where heat is absorbed or emitted to either a lower or higher temperature.

You manually control the temperature of the portable a/c through a mobile app. Sony claims the battery life is 24 hours but tech industry friends say it is much shorter right now.

The Reon Pocket received a lot of support from the Japanese so it will be available March, 2020 at $117. One catch! It will only be sold in Japan.

Another industry friend, who is very close to Sony, said, “There are a bunch of similar unusual projects within Sony, but they do not get funded for production unless they can validate a demand. This process allows Sony to test a new concept without wasting overall corporate funds. By the way, this is not the first attempt at a personal air cooler. I have seen this in 2000. It’s totally a marketing ploy.”

I think the marketing concept is pretty interesting. Let’s see what happens.

Every tech publication is talking about the new robot dog Sony is introducing to the U.S. market in a few weeks. Bow wow. You can read about it by just Googling Aibo, but I’m prepared to tell you all you need to know.

It cost $2,899 and the battery only last two hours. I can justify the price for early adopters, but I don’t think two hours is enough time for any new gadget. You are just getting warmed up when the batteries run out. That doesn’t work for me, even though I would love to be one of the first to own a dog that I could leave home for days, or weeks, without any worries.

The other negative is that Aibo should only be used indoors.

Most tech folks who have played with Aibo say it is adorable and a lot of fun.

They also said that Aibo features artificial intelligence and sensor technology. I have posted several videos here that will explain all of the fancy features.

I love the fact that Aibo includes a companion app for picture taking, commands, and learning tricks and navigation.

The wonderful thing about Aibo is that you can develop a personal relationship with the doggie robot. Again, watch the videos.

I’m not saying that Sony lied from the beginning but this is a clear case of when “opportunity knocks,” run with it! Having been in PR for most of my adult life, I think I have the advantage of knowing when something is real or manufactured. For those of you who don’t believe me, all I have to say, in the famous words of Joan Rivers is, “Grow Up.”

There is no doubt in my mind that Sony initially thought they received some notification from North Korea that they hacked their email servers plus threatened to attack theaters nationwide 9/11 style if they released “The Interview.” However, I’m sure just a few days later they learned that a disgruntled employee was the mastermind behind the whole event.

Sony was just embarrassed to admit they had fallen for the prank. After all, the President of the United States, had basically told everyone in the country that they had the right to see the movie. At this point Sony was not willing to make any retractions. They were too deeply involved.

If Sony is smart, no will ever find out the truth. They should just play dumb and pray that ticket sales at movie theaters, YouTube, and other digital services, generate record-breaking numbers.

This is what the Twitter community had to say.

Gabe Bergado @gabebergado
Did Seth Rogen just take a selfie with a point and shoot camera? Now we know this movie is totally fake #TheInterview

LiberalPaul @LiberalPaul
Apparently, the best way to get Americans to watch something is to tell them they cannot watch it. #TheInterview

David Johnson @DJtakespictures
For those of you watching #TheInterview at home, I’ll be driving door to door selling $18 bags of microwave popcorn and $10 cans of soda.

Patrick White @PatrickWhiteEsq
Well, that was one of the most brilliantly orchestrated marketing campaigns in history #TheInterview

Guy Endore-Kaiser @GuyEndoreKaiser
Sony has a site where you can watch The Interview for $5.99 and I can’t think of a single reason not to trust them with my credit card info.

Xerø @Ecksearoh
Wow #TheInterview was horrible. The Koreans were actually trying to save us from that awfulness.

J-DIEZEL (@JDiezelFitness)
#The Interview was exactly what I thought: American propaganda at its worst. Vulgar, unfunny, immature humor. Why Hollyweird why 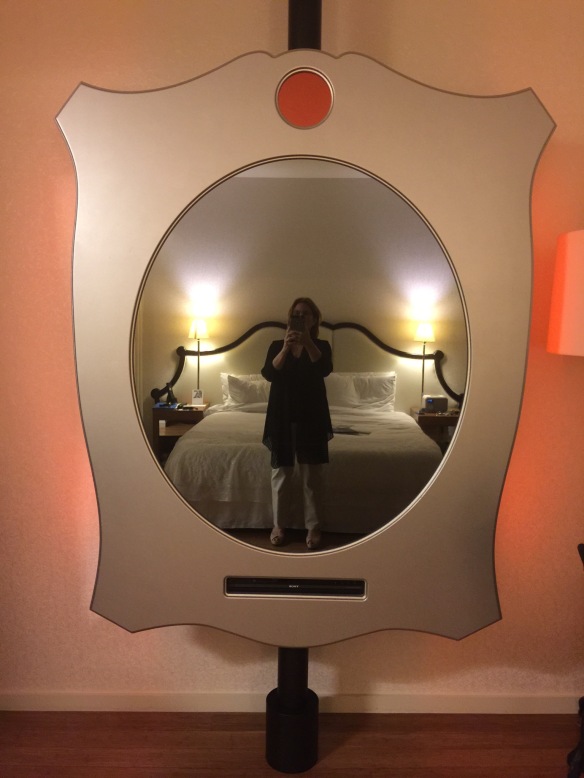 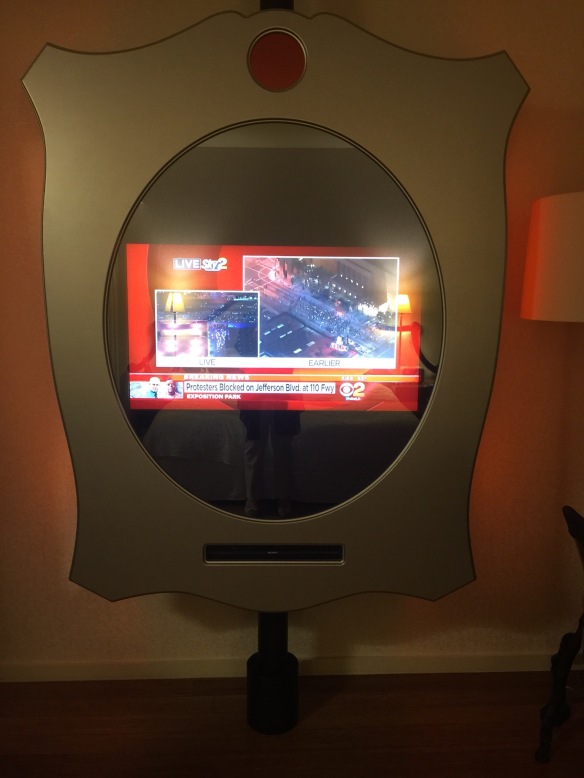 I have stayed at the best hotels in the world, and some of the worst. I think I have seen it all, At least I thought I did until I walked in to our guest room at the Mondrian Hotel, in West Hollywood, earlier today.

There was an object in the room that looked like a mirror but doubled as a TV, It is totally bizarre but I love it, Eliot thinks it’s stupid, He would rather have a larger flat screen TV.

The TV inside the mirror is a Sony 42-inch unit, It took us a while to figure out how the TV got inside the mirror. We discovered that it was the brainchild of Benjamin Noriega-Ortiz, the interior designer responsible for the new look at the hotel. It was very clever to take an ordinary TV and turn it into an art piece.

I guess you have to be a lover of contemporary installations to appreciate it, At the very least, it shows great energy and positive thinking.